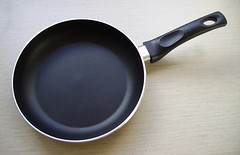 I was in a customer service training this week. One of the girls said she had a call where the woman asked if the coating on the cast iron pans would kill her birds.

Everyone laughed until I said, “Teflon fumes can kill your bird.”

The trainer said, well that would mean that eventually it would probably kill people. I said, yep.

The subject of a near and dear fast food restaurant came up. A few people in the room said they don’t eat there. There was a discussion about chicken nuggets – what’s in them and the psychology of the shapes.

As little as a year ago, these conversations were not happening. If you brought up food issues, people looked at you like you had 2 heads – like you were some kind of freak.

Now, people are not only listening, but they are talking about it and making changes in their lives. I find that so exciting! Better late than never, right?

This is the way we take care of the health care issues – get everyone eating healthier food!

I still felt like a character in the old lean cuisine commercials. One girl said she was going to make banana pudding with her overripe bananas. I said I made banana French toast with mine. Oohs and ahhs… Later they were talking about what they were going to be eating for dinner tonight. I said we were having chicken sandwiches on garlic bread with mozzarella and avocado, and a tossed salad. You’d think I was talking gourmet cooking. That’s just normal, cheap, easy everyday stuff for us.

I think that is still a hurdle. People still think eating healthier is hard, time consuming, and expensive. Its not. Head over to the recipes in the members area and see what I mean.

Add to that – you won’t be getting sick as much. How much money will that save you?

2 thoughts on “Will that pan kill my bird?”