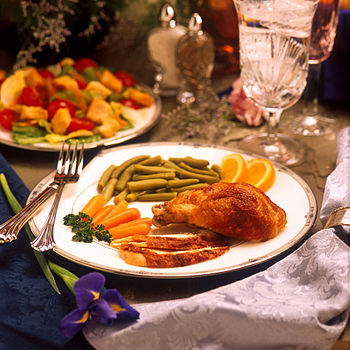 I have often pondered this question. I mean, cooking can be hard, but it doesn’t have to be.

I taught my daughter to cook fast meals. She says, “I can’t believe people think this is so hard.”

I just ran across an article from a couple of years ago where the author discovered how easy it is to make vanilla pudding. She says,

I had no idea how easy it is to make pudding until Saturday, when I hunted down a recipe online. I’m not going to point you to the recipe, it wasn’t a keeper, but it did make a successful (if way too sweet) vanilla pudding. It took me all of 15 minutes to whisk together some milk, cornstarch, vanilla, sugar, salt and butter and another few hours for it to set in the refrigerator.
As I was whisking, I was reminded of something Laurie David, author of “The Family Dinner,” said to me last week when I was interviewing her for a magazine piece I’m writing. She said that we are “marketed and advertised to death to make us think cooking is hard.”
I had to wonder, where had I gotten the idea that pudding was hard to make? Somehow, I came to believe it. Maybe it was a subtle message I heard as a child because it wasn’t made from scratch in my home. Maybe Bill Cosby told me it when I was a teenager. (In the 1980s, Bill Cosby was a spokesperson for Jell-O.) Did Bill Cosby market and advertise me into thinking I couldn’t make pudding?
Pudding, it turns out, is a basic dessert that’s easy to make. But even though it’s easy, as a culture we’ve been taught to believe cooking is hard, and we need foods to be as easy as possible to make because … because why? We don’t have the skills? We don’t have the time? Our time is better spent doing something else?

Chef Jamie Oliver has been on a mission to show people how easy it is to cook, and so have I. He’s just more famous than me.

Seriously, if you haven’t tried any of the recipes in the members area, you need to. They are so brain dead simple you won’t believe it.