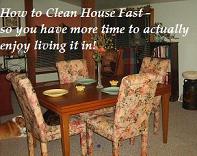 So, we are looking at whether cleaning the house changes behavior. This is the latest update…

I was away for a week dog sitting. I was afraid of what I would come back to.

I can’t help it. The visions of what this house used to look are still clearly burned in my memory. There’s a part of me that still expects that things are going to explode.

One of the first things I did was clean the bathroom. It wasn’t terrible. It wasn’t clean enough for me to want to use it, but for them it really wasn’t bad. It took less than 10 minutes to whip it back into shape.

Even the kitchen wasn’t bad. Most of the dishes were done. Again, it only took a few minutes to whip it back into shape.

While no one dusted or vacuumed, they didn’t leave anything laying around. In the old days (which was just a few months ago,) there would have been stuff dumped on every chair.

As a matter of fact, keeping the house clean with the dogs was much more difficult. Muddy paw prints, dirt, food on the floor, hair, and a lot more dust is a constant challenge.

So, has cleaning the house changed behavior? I would say so. Oh, its not perfect. They still won’t close the shower curtain, and their bathroom habits are still not so good. But things have changed substantially.

Will they stick when I leave? Will they carry it on when they move out? I don’t know. It would have been more effective if this had been done when they were younger.

I’ll let you know if anything Earth shattering happens.