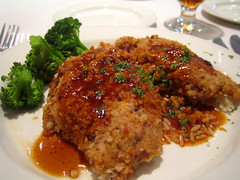 We planned a sort of laid back weekend this weekend. We really needed a break! So when I was going to the store Friday, I asked my daughter what she wanted to eat this weekend. She said “Good Food!”

Well, that narrows it down, doesn’t it?

She definitely wanted the Pecan Crusted Chicken. Her boyfriend likes green beans, so we had to have those, and we topped it off with cooked apples for a side dish.

For Sunday they picked Teriyaki Chicken with buttered noodles, and a big tossed salad.

It was a weekend of great company, relaxing, and great food.

Everything is cleaned up, and I’m ready to settle in and watch a movie. Oddly enough, as much as everyone else likes them, potato chip cookies are not my favorite – but there is some chocolate mousse and some raspberries left that have my name on it.

Oh, you thought they were going to pick pizza and burgers, didn’t you? Not often around here. My daughter spent about an hour on Rebel With a Fork. She was reading the recipe for the Pecan Crusted Chicken, and she said, “hey that’s pretty easy – even I could make that!”

Fast, easy, healthy. Oh sure, it’s not what the health gurus are trying to sell you – but it’s a lot more enjoyable way to get thin and healthy. Join the Rebels! >>>

2 thoughts on “When the kids choose the menu”