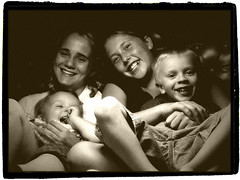 Do your kids drive you crazy? Do you sometimes wonder if they were exchanged at birth with an alien infant?

What do you think would happen to them if you started feeding them like human beings instead of lab rats??

They’ll have a better attention span.

They won’t have to deal with fat jokes.

They won’t be getting sick all of the time and bringing home every disease known to man. (feels like that sometimes, doesn’t it?)

Imagine a life with fewer behavior problems, fewer outbursts, temper tantrums, arguements, sick days and trips to doctor’s offices. I didn’t have time for all that nonsense when raising my daughter as a single mom. Do you?

You’ll all be a lot happier.