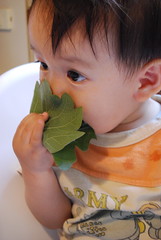 This strategy works especially well if you have small kids who haven’t developed bad habits yet.

You see, we are born with a healthy metabolism, and healthy cravings. It’s only after constant exposure to bad stuff that our tastes change. Think about Scotch for example. You have to learn to like it, right? It’s really nasty stuff until you develop a taste for it.

So, if you make a commitment to feed your kids healthy foods, they will eat them – and so will you unless you want to make 2 dinners every night.

Our commitment to our kids can make us stop doing a lot of bad things. I stopped drinking when I realized that taking care of my daughter while drunk was not a real good idea.

We ate unbreaded, seasoned chicken tenders, raw broccoli and carrots, and applesauce more times than I care to remember. That’s what she liked. And yes, I thought she was a weird kid too, until I realized that my niece was the same way even to this day. The chicken didn’t need to be breaded and deep-fried. They just like chicken – period. Kids don’t like their vegetables cooked – but they’ll eat them raw. The only packaged thing they absolutely loved was Kraft Mac & Cheese. No other kind.

When my daughter was 5 & 6, she would have a bunch of kids over playing. I could put a bowl of raw broccoli on the table when the kids were playing and it would disappear. I didn’t have to make them eat it or even put out dip. I was amazed.

I have a good friend who has adopted a couple of foster children. The first one, who is now grown and moved out – was horrible. Years later, the second one was looking like she wasn’t going to be any better. I was finally able to convince my friend that behavior problems are largely tied to diet. I think at this point she was desperate enough to try anything – so she started feeding her more fruits and vegetables, and less McDonalds and Hamburger Helper.

And what does she like to eat? Chicken, fruits, and raw vegetables. (and the mac & cheese of course)

The difference in this child’s behavior is incredible. And my friend is losing a lot of weight as a result.

So go ahead – Use your kids to lose weight. Make a commitment to feed them healthy and you’ll have no choice but to get healthy yourself.

How the heck do you do that? Click here for help

6 thoughts on “Use Your Kids to Lose Weight”