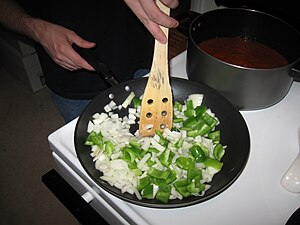 In a few short months, my darling daughter has gone from hardly being able to make a hot dog to an up and coming chef. Well, to hear her tell it anyway…

I said, “yeah, only because I taught you all the shortcuts.”

She tells the girl, “She can show you too!”

We ran into a friend on our dog walk tonight. The 2 of them were having a grand conversation about natural foods and GMOs, and cooking. I’m like, really?

The subject of the pumpkins came up a couple of times today. Most people can’t imagine trying to cook with fresh pumpkin. Emma chimes in, “its not hard!”

If you read how some people do it, it sounds horrendously hard – but we have a secret method that makes it easy. OK, its not a secret. Its posted at SaneSuperWomanClub for all to see, but that is not the point here.

With a few secrets under her belt, my little daughter has become quite confident in the kitchen. She can talk intelligently about eating healthy. She’s lost weight, and she hasn’t been sick yet this year.

And yes, I can show you too. That is why SaneSuperWomanClub is there – to help you do the same things she has done. Use it!

On a separate note – the computer is fixed thanks to the most awesome IT guy at work. Thanks Justin!