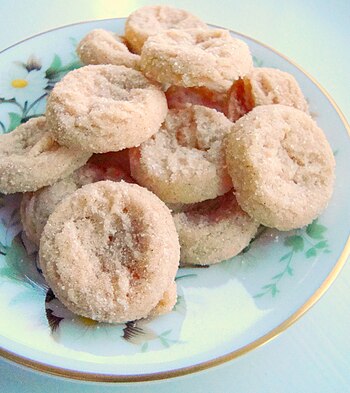 Here they are with raw sugar instead of powdered. (Photo credit: Wikipedia)

Last weekend I was having a conversation with my sister’s boyfriend about how food has changed since we were kids.

Waaaaay back then, people were not eating the amounts of sugar that they are today. Type II Diabetes was an old people disease.

But its not because people are eating more candy bars than they used to.

When we were kids, there really wasn’t much in the way of packaged or instant foods. We ate real food most of the time. Candy and cookies were a treat. We just didn’t eat a ton of sugar. Oh sure, there were people who put 2 teaspoons of sugar in their coffee. Being from a southern family, we put sugar on a lot of things. When my grandfather was growing up, one of his favorite treats was to take a fresh stick of butter that his mom (my daughter’s namesake) had just made and dipping it in sugar and eating it. Sounds gross, doesn’t it?

Now, if you are baking, everyone is wanting to know if you can cut the sugar in the recipe. But at the same time, they are ingesting pop, juices, yogurt, packaged foods, salad dressings and a hundred other foods that have tons of sugar in them.

And that is the problem. Almost every bite of food that most people eat have sugar in them. You have to. How else are you going to make dead food taste good?

I really want to encourage you to make more of your own food. It’s not that hard. You have access to hundred of my recipes. I rarely make anything that takes longer than half an hour to make. I don’t have time for complicated cooking. I’m betting you don’t either. And that is the biggest part of the problem, isn’t it? How do you get your family fed, fast? What I’m giving you, totally free – is delicious food that you can get on the table fast.

Go and find some new things to try!