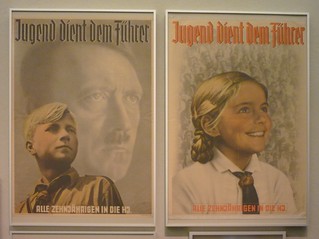 There is an old movie going around Facebook. It all started with the question, if only 10% of the German population was part of the Nazi Party – how come no one did anything to stop the slaughters. This teacher set out to demonstrate just how easily that happens –

Do you see any parallels in today’s world?

Shortly after watching this, I was reading an article about the situation in Russia.

“The economic and business elite is just in horror,” said Igor Bunin, who heads the Center for Political Technology in Moscow. Nobody will speak out because of the implicit threat of retribution, Bunin said by phone yesterday. “Any sign of rebellion and they’ll be brought to their knees.”

You have to assume that this scenario is happening in many counties that I’m sure you could name.

But you say, oh, that couldn’t happen here.

How is it that a distinct group, numbering less than 1% of the population is able to maintain our focus and dictate policies that the majority does not agree with? As a matter of fact, it is now against the law for the 99% to speak out against this 1%. The majority must adhere to their agenda.

How is it that we are so caught up in the media blitz surrounding these issues that we totally ignore the other policies being passed by our government that truly do affect the majority?

After watching the congressional hearing on GMOs last week, it appeared to me that our congress really does not know what they are dealing with. They have taken what the industry lobbyists have fed them hook, line and sinker. They tell congress that these foods are perfectly safe, and they are helping to feed the world. Even though there is plenty of evidence to establish reasonable doubt. And that those of us who dare question it are just nutcases. Some say even dangerous.

No one seems to question the effects of a chemical diet.

No one seems to question the new paradigm of doing less and less, and getting paid for it. Don’t worry – the government will take care of you. Heck, you don’t even need to get dressed anymore. Our society has gotten lazier and lazier. Not many are ambitious. Things going on now would have had people rioting in the streets. Now -barely a whimper.

A weak, sick, dependent population is much easier to control.

Ah yes. People who can think will always be dangerous.

Being a sheep is easy. It doesn’t require effort, or thought, or discipline, or courage, or conviction. Will the ultimate cost be worth it?

Do you have any thoughts?