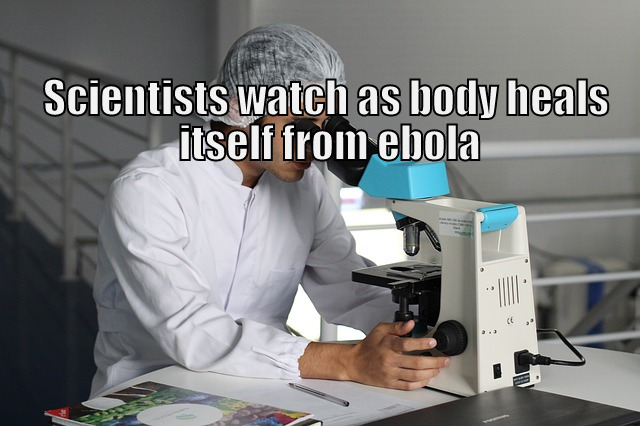 The National Institute of Health tracked the progress of Ebola in a patient in 2015. What they found was incredible…
They observed the virus being cleared from the white blood cells.
They watched as genes involved in cell damage and inflammation were switched off and genes that promoted cellular and organ repair were switched on.
All of this happened before any obvious signs of improvement in the patient were evident.
The patient was given fluids and electrolytes. He was not given any Ebola drugs. The article doesn’t state whether any other drugs or antibiotics were given.
Pretty incredible, right?
Now the results may not have been the same with someone who has a compromised immune system. But it goes to show you that the body can and does heal itself.
You can help it do that by keeping your immune system strong…

Here is the blurb from their newsletter. (yes, I really do read this stuff!)

NIH STUDY OF EBOLA PATIENT TRACES DISEASE PROGRESSION AND RECOVERY
WHAT:
Analysis of daily gene activation in a patient with severe Ebola virus disease cared for at the National Institutes of Health in 2015 found changes in antiviral and immune response genes that pinpointed key transition points in the response to infection. The changes included a marked decline in antiviral responses that correlated with clearance of virus from white blood cells. The analysis also showed that the preponderance of host responses shifted rapidly from activation of genes involved in cell damage and inflammation toward those linked to promotion of cellular and organ repair. This pivot came before the first signs of clinical improvement in the patient, who was admitted to the NIH Clinical Center on day 7 of illness and remained at the hospital for 26 days. Researchers from the NIH’s National Institute of Allergy and Infectious Diseases (NIAID) led the study.
The patient received intensive supportive care, including fluids and electrolytes, but did not receive any experimental Ebola drugs. The research team used blood samples taken daily throughout the patient’s hospitalization and recovery to measure the rise and decline of virus replication inside white blood cells and serum and to track the timing, intensity and duration of expression of numerous immune system genes. This allowed the team to correlate changes in gene expression with subsequent alterations in the patient’s clinical condition. For example, the study characterized changes associated with the development and resolution of blood clotting dysfunction and multiple organ failure during the critical phase of illness.
Although this study represents only a single case, it provides unprecedented detail on the host response to Ebola virus disease and may inform the development of therapeutics designed to boost or accelerate host factors that most effectively counter the virus and promote healing. It may also lead to better prognostic criteria to enable clinicians to tailor the treatment of patients with Ebola virus disease in ways that can best promote recovery.

2 thoughts on “The Body Healed Itself”