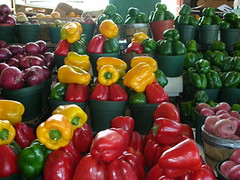 Red bell peppers are very high in vitamin C and bioflavonoids. They are much higher in carotenoids than green or yellow peppers and contain vitamin B6 as well as capsaicin, a natural painkiller which is considered to be useful for arthritic pains.

Experts consider red peppers to be especially beneficial against cancer and heart disease. And a lot of people like the red peppers better. They have a sweeter, milder taste than the green peppers.

That’s not to say that green or yellow peppers aren’t a valuable addition to your healthy diet. All peppers  contain Vitamin A, Lutein and Zeaxanthin, which helps protect again certain age-related eye problems. And, Bell peppers are also one of the few sources of flavones which help reduce the risk of breast cancer.

There have been a lot of great looking peppers at the store lately. Take advantage of it!

1 thought on “Superfood of the week – bell peppers”