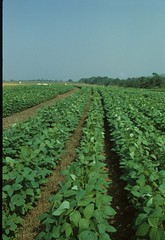 Or maybe it started out being helpful, but it has been used to such an extent that it is harming us.

Whether it helps women with menopausal symptoms or lowers cholesterol is now questionable. New studies indicate that it’s not the safest thing after all – use with extreme caution – may cause adverse effects. May interfere with thyroid medication, upset hormonal balance, block absorption of calcium and encourage prostrate and breast cancers.

The World Health Organization has issued a warning about the high consumption of estrogen-like chemicals. These would include lignanes and iso-flavens found in soy products, and many packaged foods contain soy. Other sources of estrogen-like chemicals can be found in plastic packaging, and pesticides. In other words, people are consuming a large amount of female hormones.

Like many other things, there is a large amount of datasuggesting that phytoestrogens (lignanes and isoflavenols), may prevent carcinogenesis andinhibit tumor growth in breast cancer, as well as prevent osteoporosisand cardiovascular disease – but when consumed in large amounts, they become dangerous. Just like alcohol – when taken in small amounts, it’s a good thing. Over-do it, and it’s a bad thing. And we are being bombarded.

It has even been suggested by some popular Doctors that soy is making our boys more feminine. So we may want to keep our men away from soy and tofu – to their relief I’m sure!

And to add insult to injury – most soy and soy products are now from GMO crops. Soy allergies have skyrocketed because of this.

But what about the studies that say soy is healthy?

The healthy soy is the Japanese fermented soy, not the artificial processed American garbage. I remember tobacco farmers changing their fields over to soy because that’s where they could make better money. They just shook their heads. They could not understand why people were buying a weed.

Now, virtually all the soy sold in this country is not natural.

Even in its natural form, if you ate soybeans straight from the field, you’d get sick. Soy contains several toxins. It’s inedible until those toxins are removed.

To make it edible, soy is industrially processed. This process involves cooking crushed soybeans in a solvent made from petroleum. Some soy products are also washed in acid.

As if that weren’t bad enough, 85% of the soy grown in the U.S. is from genetically modified seeds. So genuinely natural soy is almost unknown here.

Personally, I won’t eat any U.S. soy if I can help it. That means avoiding anything with the word soy in the ingredients – soy flour, soy protein, soy oil…

If you are using a protein powder – make sure it’s whey protein, not soy protein.

1 thought on “Soy is not healthy or natural”