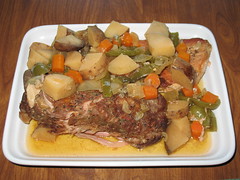 Have you noticed how cheap pork is right now? There is a reason for that.

You see, feed is going to be very expensive due to the drought this year. Many pig farmers slaughtered all of their hogs rather than try to afford to feed them later – so right now there is a glut of pork on the market. But once it’s gone – its gone.

Many sources are reporting that a bacon shortage is a bunch of baloney – but when you talk to farmers, their story is a little different. Either way – you will pay more for pork once this glut is finished.  So buy it now!

Pork chops and bacon don’t take up that much room in the freezer, and if you eat pork the prices are just too good to pass up right now.

I individually wrap the pork chops and then put them in a freezer bag so I can take out just what I need later on. You can do the same with bacon. Package it in portions. We don’t eat bacon very often, but once in a while its really good, right?