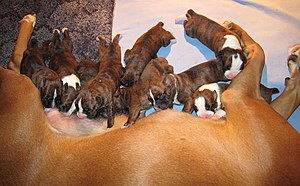 Wondering what a boxer-corgi mix would look like (Photo credit: Wikipedia)

I know that sounds weird, but we really did wonder if this dog was gay. He has this thing for licking male dog parts. Ick, right?

He never did the humping the pillows thing that my other male dogs did. He always seemed a bit odd.

The last few days, the boxer from a few houses down has been visiting. Blayze (my dog) has taken to licking her parts. At least its a female. But he’s so obnoxious, he just won’t stop. You yell at him, and 30 seconds later – he’s back at it.

So today, the dog is moaning that he has to go out. I’m trying to get work done, but you know how it goes. We go out. Next thing I know, here comes the boxer. Then the Llaso from next door comes out. UGH! So much for work. I’m stuck.

Next thing I know, my little corgi is trying to mount the boxer. I yell. She lays down belly up. He’s licking her all over her belly, and private parts. I’m like, oh no – this isn’t happening!

I’m waiting for the owner to come looking for her. No such luck.

They run around and play, and then start the stuff again. He was getting too close to getting in. I start heading for her house when the owner finally shows up. She’s been at my house for like an hour. I asked him if his dog is in heat. He says no. I told him that my dog is trying to mount her. He tries to take her home, but she doesn’t listen to him. Imagine that.

I went in with my dog and left him to handle his own.

We go out again a couple hours later, and here comes the boxer. I am not dealing with this. I take the dog back home again, stopping in another neighbor’s yard to pick up her poop along the way. I explain to him that my dog is trying to hump his dog and that I have to watch them every second or we are going to have some weird looking puppies.

The light went on.

So he’s calling the dog into the house in the sweet little child voice, “come on Cheyna, lets get a cookie.”

I know this saga isn’t over.  Anyone have some tips?

What do you think a corgi-boxer mix will look like?