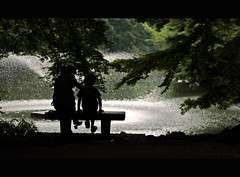 It’s been a weird week for me. Ads are starting for Mother’s Day, and my mother’s birthday would be this weekend. It’s especially weird this year because I am just turning the age when she died.

My mom died at age 53 from sinus cancer. It’s still pretty rare, but then it was unheard of.

My mom didn’t give herself a chance at life.

She never spent any time outdoors. She never ate fresh fruits or vegetables. She used salt like it was going out of style. She didn’t get any exercise.

She smoked 3 cartons of cigarettes a week (I kid you not), and drank.

When she was being diagnosed, I talked to the doctor in the hall before he went in to see her. I explained to him that she smoked a lot, and that she had a drinking problem that she would deny. He acted like I was lying and went in to question her.

He proceeded to ask her questions about her lifestyle. He asked her if she drank. She said yes.

He asked how much. She said 2 drinks a day.

At this point he gives me a dirty look and asks her what she drinks. She simply states, “JB.”

He asks, how big a glass. She says, “oh, you know, a regular glass”, and makes motions with her hands to show the size of a regular tumbler. Like you would drink pop in.

I thought the doctor was going to fall off his chair.

She was drinking 32 oz. of straight JB a day – but in her mind, she was only drinking 2 drinks a day.

We weren’t close. My mother was abusive. I left home at 16. I was 18 when the state gave me emergency custody of my 15 year old sister.

I tried to be there for her as much as I could, but my plate was pretty full. I had my grandparents that needed help (her parents), a premature baby at home with a tracheotomy and medical equipment, an alcoholic husband, a house, a dog, a yard, and a full time job. At one point I had my grandfather in one hospital, my mom in another, and my grandmother didn’t drive. And I lived an hour away from all of them. The only help I had was my good friend who would watch my daughter because I couldn’t leave her with her dad.

The cancer was pretty awful, and quick. It ate through her esophagus so that if she drank a glass of water she would drown. It quickly spread to her brain. She was dead in 6 months.

I quit drinking after that. I eat well and take my vitamins. I get plenty of exercise. But one thing I’ve never been able to conquer is the stress in my life. My life has always been a circus. And I still smoke. I guess it’s my form of tranquilizer. (I never claimed to be perfect!)

As I come up to my mother’s birthday I wonder, will this be the year I fall over and die from the stress? Will I be one of those people that has a heart attack out of nowhere? Will I manage to live longer than my mother? Weird, isn’t it?

Turns out that I’m certainly not alone in my mother issues. Mothers have quite a hold on their children that effects them throughout life. From now until mother’s day, I’ll be writing about some of these. I think we need to address the issues we harbor within ourselves about our mothers, and try to understand how we might be affecting our kids.

And you can bet I’ll be focusing on eating even healthier than usual until the end of the year when I will have managed to live longer than my mother.

Want to join me on my eat healthy to stay alive crusade?

4 thoughts on “My Mother Still Haunts Me”