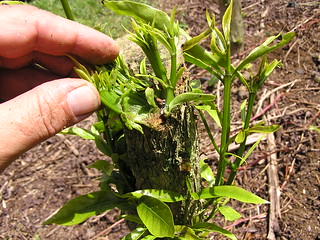 We’ve talked about the dangers of eating too much soy, which is impossible if you eat packaged foods. It’s in practically everything processed.

Now it seems that there is even more to worry about …

But wait, it gets worse. Soy, which is now the second largest crop here in the states after corn, has been put in a stranglehold by the chemical industry. Shockingly, more than 90 percent of soybeans being grown on U.S. farms are genetically modified to withstand drenching in herbicide chemicals—mainly Monsanto’s Roundup.

And now a new study, published in the journal Food Chemistry, has confirmed that glyphosate residues (the active ingredient in Roundup)—and AMPA, an acid into which glyphosate breaks down—were lurking in ALL ten of the GMO soy samples they tested. And the levels of this creepy chemical are even higher than what Monsanto’s OWN scientists have called “extreme.”

We’re still in the process of figuring out all the bad effects glyphosate could have on our health, but just last year a bombshell study, published in the journal Entropy, linked glyphosates to Parkinson’s, infertility and cancer. In a chilling line from the study, MIT researchers referred to glyphosate’s negative impact on our health as “insidious,” saying it “…manifests slowly over time as inflammation damages cellular systems throughout the body.”

If you eat any processed foods, it’s nearly impossible to avoid all GMO soy these days. Until more states follow in Vermont’s footsteps and require clear GMO food labeling, the best you can do is buy organic, and eat as many home-cooked meals as you can manage. Besides, the food will taste better and be better for you anyway.