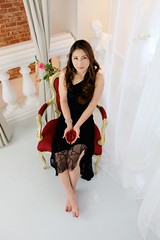 Working in a clothing store, I heard all kinds of comments and stories from frustrated women who couldn’t bear the way they looked in the mirror. I would hear things like –

“My arms flap in the breeze.”

“I need to lose a few more pounds before I’ll try on anything else.”

“Wow, these clothes are cut really small.” (they were actually cut large)

“I used to be skinny. I can’t get used to looking this way.” (like it’s inevitable and you just have to live with it)

“I guess I have to start shopping at the big girl’s store.”

It would get so frustrating sometimes. I would get women who –

* Wanted sleeves because they don’t like their arms, and

* Wanted a higher neckline, and

* Not too short because they don’t like their legs, and

* Not too clingy because they don’t want to show bumps and bulges, but

They didn’t like the empire waist that wouldn’t cling anywhere because it makes them look pregnant.

Sometimes I just wanted to throw my arms up in despair. I just didn’t have any long-sleeved, mock-neck tents that make you look thin in stock.

Then I would get women who tried on things that were too big in an attempt to hide their bodies. The end result was that they just ended up looking fat and dumpy.

When I had a woman who had an open mind and would let me work with her, I could almost always find something that would look good.  One time I had a mother-daughter team who needed dresses for graduation and confirmation.

The daughter was a size 4 and kind of stick like. Kind of like me, but much younger.  The mother was a typical size 14-16 with quite a few body issues. Both were trying on clothes completely wrong for their body types. They would even try on the same style – which of course wasn’t working either.  Another sales person had been helping them, and she finally said – “I don’t think they’re going to buy anything.” And that was that. That’s pretty typical, isn’t it?

Anyway… I went over and asked if they would mind if I showed them a few dresses that would look good on their body type. To which they agreed right away. They were so frustrated!

I brought them things that were completely different from what they had been trying on.  When I handed one dress to the mother, I said, “ this dress will fit you perfectly.” She looked at my kind of funny and said, “OK, I’ll try it.”  When she came out, she looked amazed. She said, “How did you know?”

In the meantime, her daughter had on a different dress – and she exclaimed, “Oh that is cute on her!”

First, have realistic expectations. You can find something that will look good, but you may have to try on quite a few things and experiment a bit with things you might not normally try.

High fashion doesn’t work for most people. Very few people can pull it off well, but many will try.

Once you find a style that works for you, try to stick to it – no matter what the fashion trend of the day might be.

A v-neck looks flattering on almost anyone because it makes you look longer. If the dress or top is cut too low for your taste, put a camisole underneath.

If you are heavy around the middle, look for some sort of treatment detail around there. One treatment that works well is called rouching. It looks sort of like a loosely gathered cummerbund, but it usually starts under the breasts. It hides a lot of sins 😉

Another style that works well is a wrap look. That’s what the mother in the above story ended up with. And she never would have tried that style on because she thought it was too slim for her. She did need a cami to keep ‘the girls’ covered, and some sort of control panty – but she really looked good when we were through.

If your arms flap in the breeze, you will want at least a little bit of a sleeve. But that can also be accomplished with a shrug, a bolero, a jacket, or a cardigan.

Get things that fit. Buying clothes that are too big will not flatter you, no matter what your shape is.

Now the daughter needed a completely different style. The wrap would not look good on her because she didn’t have a shape to fill it out. Believe me, being thin isn’t always a picnic when it comes to buying clothes either!

For her, a straighter style cut a little above the knee works best – with either a figure flattering cut and a padded bra top, or a belted waist. She ended up with a cute red and white dress with a belted waist.

Another common body dilemma is the pear shape – larger on the bottom half. The best solution is a treatment, or a top or jacket that stops just below the waist, but above the hips. That will help reduce the look of the wider part.

Now, the best solution would be to get into your perfect body, but working in a clothes store is not the perfect setting for healthy weight loss coaching. You could get fired for that sort of thing.

But here on the Internet – I can help lots of people! I am so excited about that. If you think I spent a lot of time helping those 2 ladies find dresses, wvisit the member article database for tons of stuff to help you get back your naturally thin and healthy body >>>

3 thoughts on “Look good in your body”