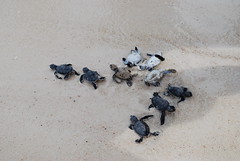 I was down on the beach today, just enjoying the beautiful Indian Summer day. I was puttering, pulling a weed here and there – when I saw the baby turtle struggling.

She was about an inch long, and struggling against the waves. She was too small to swim against the current. The waves were just throwing her about. Her little legs were going a mile a minute as she tried in vain to keep herself upright and going in the right direction.

The poor thing had to be exhausted, so I put her up just out of the water’s reach so she could regain her strength. She ran right back into the water only to start struggling again. I let her struggle for a minute, and then tried putting her just outside the waves, but she ran right back in.

At this point, I figured I had to just let nature take it’s course.

A little while later, I saw her further down the beach. In that short amount of time, she had learned to stay along the edge of the water where she was better able to stay upright and move along. Occasionally a wave would still knock her over, but she fought to get herself turned back over and went on.

The episode reminded me of how we are often tempted to try and make life easy for our children; running to protect them from every little thing.

But we are doing them a real disservice when we do that. Its the struggle that teaches us how to be strong and resourceful.

Did you know that its the same in the plant world? All of the pesticides and fertilizers make lazy plants. They no longer have to build their strength from within. As a result, we have weak plants that can no longer provide their own protection like they used to, and they produce fewer nutrients.

Most great accomplishments came from people who struggled – not from people born in the lap of luxury. Think about that.

Struggling is not fun. No question about that. But its what makes you strong and resilient. Struggle builds resourcefulness and character.

Like that little turtle – keep doing your best to stay upright and moving in the right direction. Nature has a way of working things out.

Make it a point to step outside your comfort zone a little more often and work your resourcefulness muscles. Try things that seem a little hard. Don’t shy away. Accomplishing things that seemed hard is a great confidence booster. Imagine how great that will feel when you can say “I did that!”