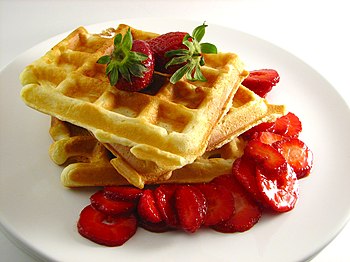 Most every morning I eat waffles with blueberries.

I would love to eat fresh waffles, but who has that kind of time? At least this way I know I am getting my blueberries in.

So, the other day I was watching videos on coconut oil. I thought what the heck, I’ll try just eating a teaspoon.

How about oil pulling? I tried that with not much more success.

But as I was making my waffle, I thought, how about if I put coconut oil on the waffle along with the butter? Then with the blueberries I won’t taste it.

It worked! So now using my waffles as a carrier – I am getting my blueberries and coconut oil. Bananas and strawberries are another favorite.

Now I know that many people like to puree vegetables and mix them in sauces. By the time you have pulverized them and cooked them, you have destroyed most of the nutrients.

And I have found that most people don’t dislike vegetables as much as they think they do, especially if you add other things they like into the mix. I’ve written about my salad bar success before where you put out all kinds of toppings and let them make their own creations.

Smoothies and juicing are great ways to disguise nutrients. You seriously won’t taste a handful of spinach in your smoothie. The other flavors overpower it.

Yes, its true that we want to avoid as many processed foods as we humanly can, but we really need to focus on the more important issue of actually getting nutrition into our bodies.

Do you have any tricks that you use?

1 thought on “Disguising nutrition so it tastes good”