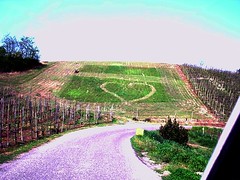 On January 31, family farmers will take part in the first phase of a court case filed to protect farmers from genetic trespass by Monsanto’s GMO seed, which contaminates organic and non-GMO farmer’s crops and opens them up to abusive lawsuits. In the past two decades, Monsanto’s seed monopoly has grown so powerful that they control the genetics of nearly 90% of five major commodity crops including corn, soybeans, cotton, canola and sugar beets.

In many cases farmers are forced to stop growing certain organic and conventional crops to avoid genetic contamination and potential lawsuits. Between 1997 and 2010, Monsanto admits to filing 144 lawsuits against America’s family farmers, while settling another 700 out of court for undisclosed amounts. Due to these aggressive lawsuits, Monsanto has created an atmosphere of fear in rural America and driven dozens of farmers into bankruptcy.

Their seed blows on to your land, uninvited – and grows. Monsanto thugs threaten and intimidate you because you didn’t buy the seed – and sue you. If you’ve watched any of the Monsanto videos I’ve posted, you’ve seen the way they work.